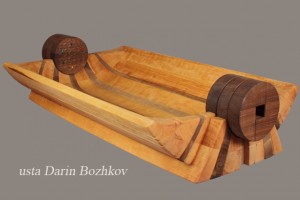 One wonderful harmonizer with powerful energy field of the Light energy. The Crib is created for soft and easy transition to the new reality during the first months after birth of child.

My work about already created two energy harmonizers – The Wand and Open Consciousness Chair, and presented in MIFF 2015 Kuala Lumpur, Malaysia, prompted a need something new – an energy harmonizer for newborns.

The creation of such a product is required because of in the dynamic change of frequency of vibration of the Earth, the newborns feel extreme discomfort in their adaptation during the first seven months after their birth.

In this information, taken from Tomsk State Institute of the Russian Academy of Sciences, is clear that there is a huge change of the frequency of vibration of the Earth and it inevitably influences people and newborn too.

There isn`t random things in the Holy books and Bible gave direction in this project. 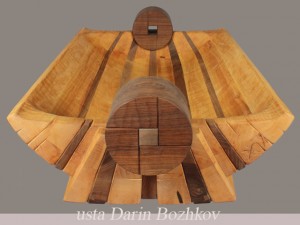 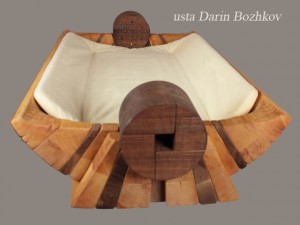 When Jesus is born he is laid in the feeding trough. In a similar shape – kneading trough, is kneaded and risen the dough for our bread century by century on Bulgarian lands. The wood is bipolar in the direction of the fibers and to the fine energies, what is happening when we dig it like a tub? The answer is – powerful energy field! That means – the livestock and pets are received energy charged food of feeding trough and the bread is given to us received from kneading trough energy.

But Jesus? And more – why the first public place for our babies and children is named nursery and nursery school!?

Some wise man is left to us a clear message!

Harmonizer was definite like CRIB – total, dig of the wood a shape. The wood must be womanly soft material. It must gives a sense for softness and warmth – alder, red willow, birch or some combinations like alder and walnut. linden and cherry wood, It was elected the latest version.

Decision for a shape, that is possible to be placed in a standard play-pen or children bed, meets the requirement for ease and comfort of use. In this way is definite its place in interior.

In shaping the energy harmonizers it is very important the sacred geometry use. I was a participant in World Wood Day (WWD) 2016 in Kathmandu, Nepal. I returned from it with the revelation about the sacred geometry of the triangle with all-seeing eye, but it is the Light Sacred Geometry – Vesika Pisces.

THE CRIB is entered like a shape in the All-seeing Eye (a traditional symbol in the iconography of Tryavna Art School) and received the Light Sacred Geometry, that created powerful energy field in a wood sculpture with a sign character. The apple of the All-seeing Eye gave a possibility for enhancement of field by woodcarving sings like Flower of Life and Dynamic Square – a sign with direction of rotation. Flower of Life is combined with Dynamic Square in a way that creates permanent and powerful energy field. These two signs are known in Bulgarian lands from the antiquity. Dynamic square on an earthen plate is a part of oldest, founded in the world, golden treasure – that of Varna necropolis, Bulgaria.

An energy of the wood carved crib`s field,

an energy of Light Sacred Geometry,

an energy and control of the direction of rotation by Flower of Life and Dynamic Square.

For filtration of the baby`s energy centers (chakras) are used seven semiprecious stones in the rainbow colors, inlaid in Flower of Life. They are interacting and protected of the unique mountain milk crystal Bagaran, built in two hidden canals in the crib`s length and the core of cylinder of Flower of Life. Bagaran has high energy value and protects the semiprecious stones of energy contamination.

Precisely made of natural materials mattress lies on the complex curves of THE CRIB and creates mildness and comfort in its use.