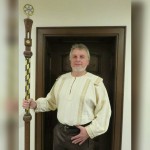 usta DARIN BOZHKOV is a former pupil of Tryavna Art School and a graduate of the Academy of Arts “Nikolay Pavlovich” in the town of Sofia, Bulgaria. His specialty is woodcarving – artistic treatment of the wood. He is the only artist-woodcarver with title “usta”(the best master) in Bulgaria. He is continuer of an old family with traditions in the building and woodcarving since two hundred years. Usta Darin is married and has two children. Member of UBA (Union of Bulgarian Arists).

usta DARIN BOZHKOV founded his USTA DARIN WOODCARVING STUDIO in 1991 year. The basic work is manufacture of applied and exquisite arts. The studio is biggest in the country according to the own area, team of specialists and production. It disposes of two buildings and all types of machines and instruments for its work.

Priorities of work are the non-standard original decisions with artistic value. Therefore the products are unique.

The studio makes all of works – woodwork, woodcarving, superficial work and others. The manufacture is independent of outside workers.

1992 – four graduated woodcarvers take bet for mastery in town of Tryavna. From St. George`s day till St. Dimitry`s day (for six months) they made wooden gates and public defence. Darin Bozhkov is the winner in this competition and the guild of woodcarvers give to him the title “usta” (best master) and a red belt for mastery.

1994 – usta Darin takes part in the Wood sculpture Festival in Brienz am zee, Switzerland. His wood sculpture “Green throne” meets the guests of the town of Swiss woodcarvers in nowadays too.

2006 – under the aegis of municipality of Tryavna is taken bet for make of representative interiors in Kalichev`s house museum in the town of Tryavna. The final is a public defence. The winner is usta Darin with his interior “The Chertog of Tryavna”. The victory becomes hard his title “usta”. For his interior usta Darin was awarded with “Firebird” from “Proto – Bulgarian school for survival” and from “Association for fenshui and holistic”.

Since 2007 usta Darin works to study projects. They’re research in their nature and they must to carry over the knowledge in the time.

2008 – usta Darin designs, finances supervises the realization of a big project “The Tryavna Column” with the participation of 100 woodcarvers (200 hands). The project is on the occasion of 200 years of the first Bulgarian art competition – Tryavna 1808 and as a token of respect to the old masters.

“Usta Darin woodcarving studio” is made a lot of iconostasis by projects of usta Darin:

2008 – participation in general exhibition of UBA in Veliko Tarnovo, Bulgaria.

In 2009 was held “First Symposium of Church Arts” in the town of Veliko Tarnovo. Usta Darin was awarded with diploma and prize winner from municipality of Veliko Tarnovo, diploma and honorary medal “Paisiy Hilendarsky” from Government Agency for Bulgarians in Foreign Countries about workmanship of the iconostasis in the church “The Assumption” – village Uzudzhovo.

2010 – participation in The Symposium of Wood sculpture in   Brienz, Switzerland.

2011 – participation in International Festival of Wood sculpture in Uvat, Siberia, Russia. Usta Dari received the award for deep philosophical revealing of the theme – Golden Goddess and became member in the family of the Siberian wonder workers.

2012 – participation in general exhibition of UBA in Sofia city.

2017 – participation in INTERNATIONAL ART & DESIGN COMPETITION 2017 Accademia Riaci, Florence, Italy. The OPEN CONSCIOUSNESS CHAIR is one of the winners in category professionals. http://www.accademiariaci.info/compfile2017/winners/

Usta Darin takes part in the process of preservation of woodcarving value.